Play/Instagram/lucianagimenezLuciana Gimenez had a skiing accident on January 7

the presenter Luciana Gimenez updated fans on his health condition and showed how his leg is doing after an accident last January 7 while skiing in Aspen, USA. This Thursday, the 19th, the host of “SuperPop” posted stories on Instagram saying: “I’m much better, yesterday I went to the doctor, he released me to go out into the street, I managed to breathe , go outside. I’ll post the pictures, please don’t be afraid, because I still have the stitches”. During the consultation, the doctor showed on an X-ray which parts of Luciana’s body were injured in the accident and indicated that she stood with her leg raised for a few hours a day. Examining her, the doctor tried to move the artist’s foot, but she could not bear the pain and let out a scream. However, the artist assured that everything is fine.

After the accident, the presenter’s consultancy issued a note stating that she was “skiing down a steep track at high speed” and that when attempting to stop she had an accident. Luciana received first aid at the scene and was later taken to hospital by ambulance. On examination, fractures to the leg were found in four different places and she had to undergo emergency surgery. Luciana was discharged on January 12, but continued to complain of pain and at times had to use a wheelchair to get around. See how the presenter’s leg turned out: 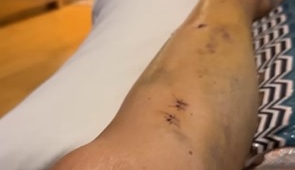 Luciana Gimenez showed what her leg was like after the accident – ​​Photo: Reproduction/Instagram/lucianagimenez 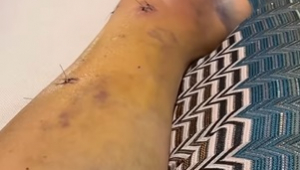 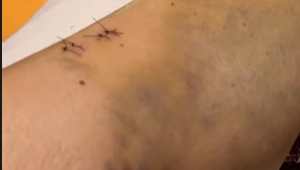 Artist took some stitches on the leg and got bruises – Photo: Reproduction/Instagram/lucianagimene